As a life-long Horror movie fanatic, motion-picture historian, musician,
and film maker in his own right, Sid Terror got an early start.  His
knowledge on the subject even had him, at the age of 7, correcting mistakes
made by the tour guides at Universal Studios!  While still a teenager, he
had already started his own motion-picture publicity and promotions
business, hired to do exploitation and publicity stunts for movie premieres
and general releases for theater chains.  These were for countless films, including
PHANTOM OF THE PARADISE, LOGAN'S RUN, STAR WARS, STAR TREK, AT THE EARTHS CORE,
THE ISLAND OF DR. MOREAU, MOTEL HELL, FADE TO BLACK and too many others to
mention here.

A tireless worker when it was concerned with anything film or Horror related, he
started College Film School courses at night (at DeAnza College in Northern
California) while he was still going to High School during the day.  Many of the
student films he worked on would go on to win awards at Film Festivals world-wide.

The through it all, while he was continuing his film school courses, he
also made time to help create a new sub-genre of music called "Horror Punk"
with his band SID TERROR'S UNDEAD.  It turned out to be one of the first four bands accredited with
spearheading the new style, along with THE CRAMPS, THE DAMNED, and later THE MISFITS.

Fresh out of film school he moved to Hollywood and almost immediately began
work in the motion-picture business, starting in the special effects make-up
field, then working his way into editing, directing and screenwriting.  For two and
a half seasons (1989-1991) he did exactly that on the cult TV series THE VIDEO
ASYLUM: Writer, Director, on-screen Host, and editor.  The show would run in
many television markets across the USA, as well as on BBC stations in the UK,
Australia, and Canada.

Today he still picks up a lot of uncredited work as a "Script Doctor"...
Kind of a gun-for-hire that comes in to rewrite screenplays, making stories work
when the name writers who sign the contracts can't deliver on a production
deadline for whatever reason.  Just don't ask him too many questions about which
movies, because his lips are sealed due to signed confidentiality agreements!

As Host and MC, his "HAUNTED FILM VAULT" shows have become the stuff of legend for
the last several years.   ...Whether they feature a simple Midnight Movie or
Trailer Marathon, 3-D Film Programs, or even appearances by celebrity guests
that he has made friends with in the motion-picture world and gets to appear
for Q&A sessions with audiences!

Currently in the process of researching and writing his own books on film history
and music, he is showing no signs of slowing down anytime soon.  Sid Terror's HAUNTED FILM
VAULT shows continue to push the limits of fun, candid, outrageous, informative,
and always entertaining! 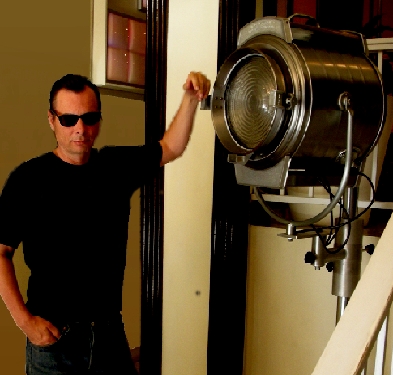